The Karma Revero GT Hybrid Sedan debuted last spring as a redesigned version of the Revero . The latter, in turn, was slightly modified by Fisker Karma.

Last fall, Karma Automotive introduced the charged Revero GTS with improved dynamics, and now has offered a similar package of improvements for the base Revero GT. Rather, two packages at once.

The Performance Kit reduces acceleration time to 60 mph (97 km / h) from 4.5 to 3.9 seconds. In this case, visually the machine remains standard. If the buyer chooses the Sports package, he will receive an additional carbon finish on the exterior and interior, GTS nameplates on the wings, 22-inch wheels with red calipers and special company logos borrowed from the SC2 concept .

Karma Revero GT costs in the USA from 144 800 dollars, Revero GTS – from 149 950 dollars. Prices of packages of improvements have not yet been published. 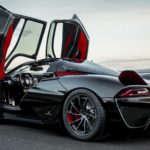